By definition, Vision is an abstract concept as it is a matter of seeing and imagining something that is not yet there, but which, nevertheless, is still very important for reaching and achieving a goal. The concept of Vision is often mentioned but never truly internalized. It requires the capacity of a long-term imagination that often puts people in difficulty. Yet, its function is fundamental!

This is one of the first concepts we have to deal with during our Team Coaching paths, in the alignment phase. It helps people in the team understand who they are and, most important of all, where they want to go!

The fact that Vision is an abstract concept while its corporate applications are absolutely realistic often confuse people. That’s why Vision not only has to be clarified but also tested!

Why is it important to share it inside the company?

Sharing the same thoughts and ideas is not enough. In the Vision there’s something more: the sharing of a dream. There are no limits in defining it and we must always imagine it as the highest level we can reach. Indeed, when we dream we do not have to see things as they really are but for what they can become. Sharing it with colleagues and team members is truly important because it allows them to know what you’re thinking of and how to help you. They can align with you and fight with you towards the same goal.

From this point of view, an important example can be a famous company like Microsoft which, in order to realize its vision to “bring a computer on each desk“, set its Mission to create software. They decided to choose that, but it could have been set it to “become the greatest builder of personal computer” or to “produce screens”. So, as we can see, the most important thing is not the destination but the fact that inside the same global Vision it is possible to decide to play a specific game: find a mission capable of identify both the company and the team.

But if the vision is so far away, why do we have to share it with the Team?

Think of what you feel when you think of your dreams, probably something like satisfaction, pride, happiness. With the Vision it should happen the same thing, the only difference is that you don’t only think of yourself but also to the future of all your team.

Don’t you think it is beautiful?

So why don’t share it with the entire Team? Why don’t let them feel the euphoria of the Vision and make them participate in such an important goal?

But there’s a lot more!

The Vision is the end and the beginning of every successful company: that’s why it shouldn’t be underestimated!

How should it be?

Vision: How to test it?

With the right questions!

Testing the Vision is difficult because in fact it is not real but only an idea. Even when we talk about ideas, however, the body responds, giving us positive or negative feedback.

We have already said that the business applications of the vision are absolutely practical and that is why it is important to make it clear and shared among the team members. Altough it can be difficult to put into words, asking the right questions and leaving people free to answer will lead to surprising results. Vision’s work is tremendously important because if we do not test the project we are going to work on, we could argue with our own team.

What do we mean by “the right questions”?

They definitely have to be open questions, not closed. You need to know how to put people in the right mood and condition to be able to observe them. We need to make them feel free to answer. So, our questions should allow people to dare answering with what they really think, and not what they think others to expect from them.

When we talk about Vision, in particular, we are referring to a design, an idea. If the people who want to be part of it are not aligned with us, or if we do not know that these people work with us in the same direction, we will understand that they are only a dead weight.

If, for instance, in the upcoming vision of the corporation there’s the intent to move abroad, there could be dissimilar responses from the employees: there can be an optimistic reaction from those with an audacious spirit or an adverse one from those who are frightened to leave their families or lose their well-being. The fact that there is a “brake” is something that needs to be previously known and verified. There are no right or wrong choices, the fundamental thing is to communicate, in sincerity, and to share doubts and fears. 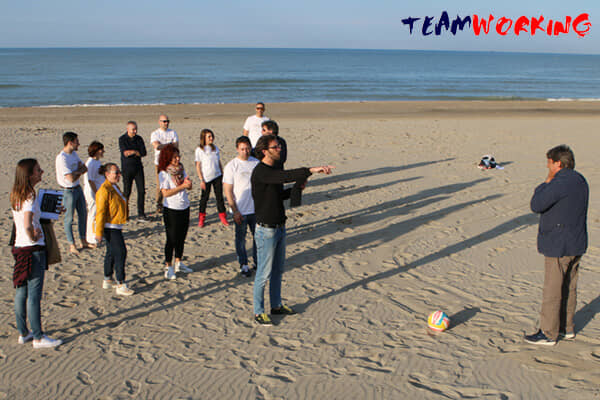 Everybody has its own job and thoughts, if we take for already settled that we are all the same it is very likely that we will fail in our mission. That’s because we will be carrying a dead weight instead of a member of our team. Unavoidably, this will slow down both efforts and reaching goals.

If we want to leave for a trip, it is important that everyone has their luggage ready. There can’t be someone who, instead of a baggage, carries a ballast that keeps them tied back.

Is your Team aware of the Company’s Vision?
Let'd discover it together

Goals only make sense if we have a Vision

Setting goals without previously working on Vision is a just like going shopping without having previously thought about what to eat for dinner. We can know what goals to set only if the have already set a Vision, a Mission and the Values.

But what are the goals? And what lies behind them? 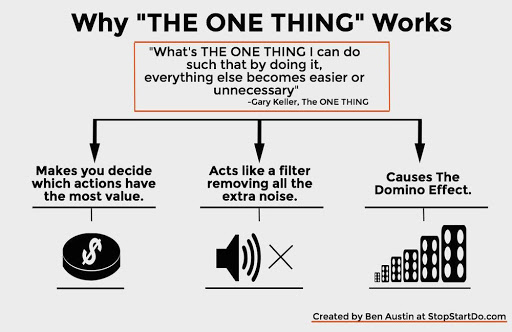 Goals differ in two main characteristics: importance and urgency. Obviously, with equal importance, we tend to resolve those of an urgent nature first even if, in theory, we should always prevent emergency as they put us in a very high stress condition. Therefore, important things should be done when we don’t need them, in order to anticipate the future. This is only possible if we have clear in mind where our project is leading to.

As for the goals that are distinguished by importance, we always have one that, in some way, if achieved, manages to make it easier to achieve the others of secondary importance. It is the goal that, in his book, Gary Klein calls The One Thing, thanks to which, once realized, our life undergoes an important change, letting us make a quantum leap.

In the moment when we focus our energies, it is fundamental to define our priorities. Briefly, we need to:

No more talking about goals!

Actually, it doesn’t really make sense to talk about goals.

Why? Because goals are just numbers, of course useful, but the most important information is the one that helps us understand what lies behind them. If the goals do not find a hook to a wider program, they remain only one more effort, one more mental excuse that, however, does not have a strong image to motivate it.

Does selling 10% more really change your life? Probably not. What makes the difference is how we perceive the challenge. There must be a different perspective: during the construction of a cathedral, for example, the attitude of those who live their work only as “putting brick on brick” is completely different from those who live it with the idea of contributing to the construction of something that will remain in history. The image, the energy and the emotion are completely different.

We must not work on goals what somehow have no meaning except because we have to reach something wider, something that everyday moves our emotions.

Rather than setting many goals that we already know we won’t be able to achieve because they’re badly set, it is worth taking a step back and understanding what is the life plan we want to achieve.

Vision: no dream is big enough

Stephen Covey  in his book spoke of beginning with the end in mind. The image is very strong. “Start by thinking of what you would like it to be written on your memorial”. What do we want people to remember about us? If we don’t have in mind what we would like others to remember us, we will probably never become that someone. We will never accomplish our goals.

People and the environment around us make the difference as does the environment around a sprouting seed. If the soil is fertile, it is much easier for us to start growing and have life. The moment when a dream is born is the most difficult one and we must pay attention to the people with whom we share it, because others can influence our insecurities to demolish us and if we are not the first one to believe in our dream, it will disappear into thin air.

First of all, we need to understand what dream can be big enough to be realized. As Michelangelo said: “Our problem is not that we have ambitions that are too great to be able to achieve them, our problem is that we have no ambitions at all.” Changing the image we have of ourselves and try to project in our mind the image of the person we want to become can really make a difference.

Begin with the end in mind

In summary, behind goals there must be:

A team without direction is a ship that doesn’t know where to go and sooner or later will crash on the rocks.

What happens, in fact, is that we will necessarily meet obstacles but, if we have a clear direction in mind, we will try to avoid them intelligently. If we don’t know where to go, the ship of the team will surely sink.

Is your Team aware of the Company’s Vision?
Let'd discover it together