Lip Dub Team Building is one of our favorite Music Team Building activities! A Team Building with all colleagues of the company, with the aim of creating a wonderful music video clip. This activity can leave an indelible memory imprint. Participants dub a famous song and create their own video on its notes while dancing and acting, with costumes and make-up always made with their own hands.

What metaphor for corporate life? It’s a joyful overturning of hierarchies and usual roles. This musical teambuilding brings out creativity that usually remains hidden in the office. On the other hand, it brings to the team a great amount of fun and thus helps to socialize. The experience is unforgettable!

And don’t forget that at the end the teams produce a real music video. It can be used as a communication mean for internal purposes, or to promote the company on social media.

What Are The Steps?

The first important step of the Lip Dub Team Building is choosing the song and writing the screenplay. The choice depends on the message or idea that the company wants to convey. Since the video will remain as a memory of the day, it is necessary to choose something special, preferably a well-known, cheerful, sympathetic tune. And then, the teams write their parts of the screenplay and decide what they want to do in the video. Finally, they create costumes and make-up always according to the main idea behind the production.

The second step is the actual recording of the video. Here everything comes together: singing, acting, dancing. The teams record their parts one by one, but they also can decide to come together at some point for a chorus final shot. It’s up to their imagination how to do it at best!

As a bonus we can propose a rough preassembling of the video in the few next hours to the event: for example, if the client’s need is to show it during dinner at the end of the day.

Are You Ready? Let’s Dance!

Once participants get into action, they really loose any shyness and exit their comfort zone. The scenes can become really exhilarating, and the joyful atmosphere helps to learn how to laugh at your own and others’ mistakes. It’s a great occasion to get to know better the colleagues, discover them and show yourself from a new and unimagined point of view.

But don’t worry: our expert music and dancing trainers are always there to make sure nothing inappropriate happen!

This teambuilding is a great tool to symbolically represent the corporate identity. It may seem fun and playful, but there’s always an idea behind. It may be linked to the company’s Vision, Mission, or Values. In this case, at the beginning participants go through a brainstorming to decide what, and how, they want to show. They need to rethink the corporate values in an original, unexpected and creative way. The result? An improved and shared comprehension of concepts, and sometimes a completely fresh point of view on them!

And even if there’s no explicit focus on such themes, the aim is always to create a precise image of the corporate identity. That’s why it’s perfect for communicating and promoting the company:

Beyond its playful aspect, Lip Dub Team Building brings many benefits to both the team and the company. First of all, this musical and creative activity is a great tool to define and represent the values that the company wants to emphasize. It is also a great opportunity to pull out the creativity, imagination, express the personality. And of course it’s a mean through which the team can improve interpersonal relationships and internal cohesion, and develop communication between the members of the group. Lip Dub Team Building develops creative abilities, shows the participants’ level of savvy. Also this activity allows the team to come together as a whole.

The benefits are really interesting: an existing group is cemented, usually uncooperative departments are approached, new colleagues are helped to integrate, team spirit and attachment to “corporate colors”are strengthened! 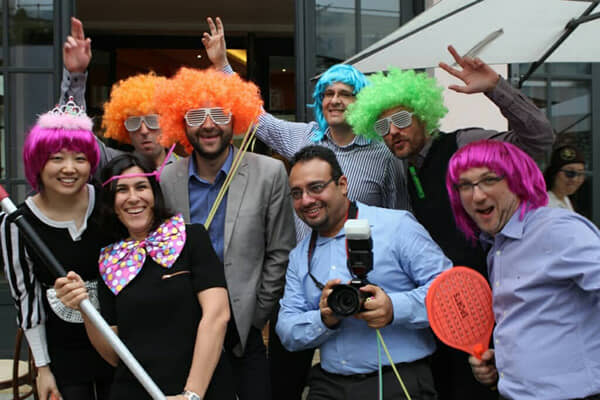 During this activity, the participants​:

We can organize a Lip Dub Team Building in Doha or other cities, in an indoor or outdoor space. The recording of the song requires a soundproofed room, but the video can be set everywhere. A nice idea? To create it in the company spaces, for example, in the occasion of the opening of a new headquarter. Just like organizing an indoor Treasure Hunt with iPad, Lip Dub lets participants discover a new building, or the old one, as they’ve never seen it before!

Organize your Music Team Building event with us!
Contact us right now