CSI Team Building in Qatar – Crime Scene Investigation is one of the most thrilling and breathtaking Action and Adventure Team Building formats.

Among the many news heard on the TV, it is on the agenda to to tell stories that can be more or less serious. A case happened the night before is reported immediately the following day on all television channels and also in the main newspapers. Nowadays it is even easier to find news of crimes just committed, perhaps happened recently also in your own town, thanks to the use of the internet. The web is full of stories of crimes, from thefts and robberies to far more serious cases such as murders. The so-called “fresh news” of the day, however, rarely report the potential suspect of a crime just committed. Before being able to find the responsible person, the authorities must proceed with the investigation.

While waiting for the culprit to be revealed, each one of us can make his own deductions with the data provides by the media. We can evaluate, among the accused people, who will be the most likely to commit the crime in question.

Everyone can make assumptions according to what is told. But, unless you have at your disposal the material obtained by the scientific police, it is not possible to solve the mystery…

CSI Team Building activity allows participants to experience the scientific investigations firsthand, making direct experience of what is the search for the culprit of the crime. Thanks to our format and trainers, they are be able to put the investigative skills of a team into play.

Collect fingerprints, analyze the crime scene, look for clues and event interrogate testimonies. The team acts as a true forensic to solve the crime!

If you watched at least once the famous TV series CSI – Crime Scene Investigation, you know already what to expect from the activity. During a corporate meeting no one would usually expect a striking twist. For example? The communication of a crime just accomplished in the nearby!

The climate that you breathe during a corporate meeting is usually quiet and concentrated. Everyone focuses on the topics to discuss and tries to pay attention to what is explained. But what to do when your guest get tired and annoyed?

The possibility to insert the CSI Team Building during a meeting allows to give an unexpected “shake” to the day. Thus, you produce in the minds of the participants the desire to investigate in the team on the crime that has just been committed.

Will they be able to solve the mystery?..

Participants start the investigations according to the little information provided and carry out all the activities that forensic detectives usually do. By involving every person present at the location in the search for clues, the teams discover interesting news relevant to the solution of the case. All participants are called to investigate the crime, using the tools of the scientific police that our trainers give them.

Each team acts according to its investigative instinct and tries to solve the case before the others. But in the end, the most important thing is to come to a conclusion all together!

Evidence can be sought in the crime scene room and then analyzed. It is also very important to ask questions to possible witnesses and then assess the veracity of their words… until teams can formulate a hypothesis of crime and express it in the final “trial”.

How do you become a Forensic Investigator?

CSI Team Building activity requires a complete preparation of the teams regarding the role of forensic investigator they will play. What are the methods participants learn to use? Those typical of the scientific police: detecting fingerprints on surfaces, producing casts of shoe prints left on the ground by possible criminals, analyzing DNA… During the first phase of this Team Building, before moving to action, participants will learn everything real investigators do.

Participants have at disposal the classic briefcases of the scientific police that you’ve seen many times in CSI TV series. They contain everything necessary to carry out the investigation. We also provide an explanation of the necessary theories and techniques of forensic work.

Do you think your team can face this thrilling adventure?
Contact us to discover it!

Concerning fingerprints detection, we mainly learn two ways to obtain the fingerprint. One is perfect for smooth surfaces, such as glasses, mirrors, playing cards and so on. The other is great for porous surfaces, such as scrolls, wood, or paper. The first method is done with the use of powders and brushes, the second with iodine tincture.

The cast of shoe prints on the ground, on the other hand, is performed with chalk. Once solidified, chalk leaves the track that participants can collect and compare to others.

The teams, always with the guide of our expert trainers, compare their own fingerprints and footprints. If there’s enough time at disposal, we can organize a real challenge! Each group aims to identify which print belongs to which participant. In this way we can easily test the observation capacity of team’s members, and their eagerness to participate actively.

Teams now interface with fingerprints, possibile objects used to commit the crime and face-to-face interactions with witnesses or defendants. They have time to gather all the clues and finally formulate a hypothesis of what happened. 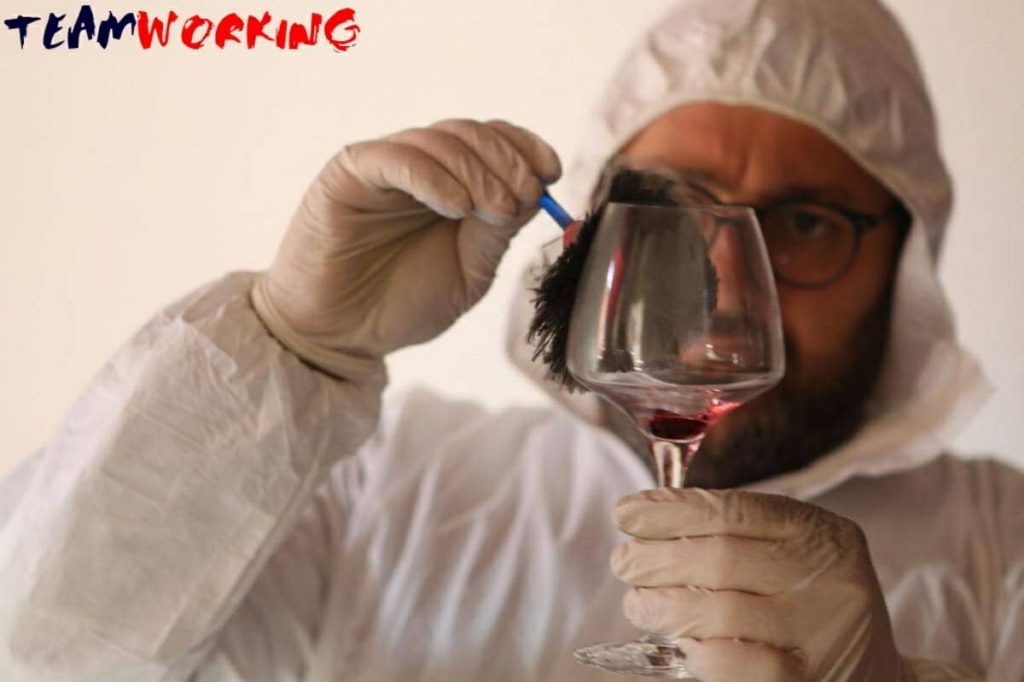 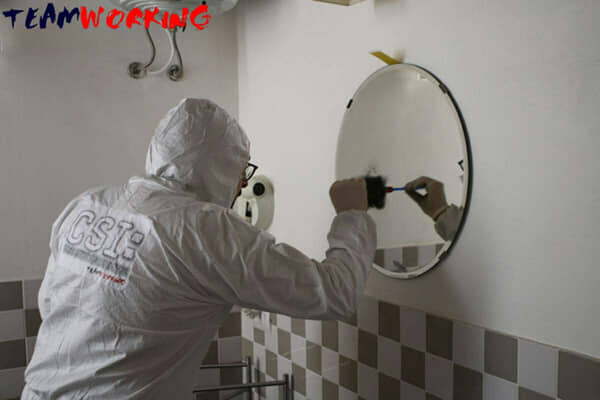 Which metaphors of teamwork can we identify in the features of CSI Team Building?

CSI Team Building brings out key concepts that will remain always useful during the everyday work in the company.

First of all, teamwork. The ability of work together efficiently is a positive force within a company, as well as in investigations. In a team there is no competition: on the contrary, it’s a chain of people who help each other. If someone notices something ambiguous in a room, he or she will not keep the information themselves but will necessarily collaborate with others so that they can put the pieces together. There is therefore complementarity: everyone puts in place their individual skills in order to reach a common goal.

Enthusiasm and proactivity improve as people get involved in a better and more emotional way to what is being done. Sometimes participants may find themselves having discordant opinions regarding the conclusion of the case. In these moments, the involvement of all and the participatory listening of the various solutions proposed are very important aspects. When opinions are divergent, respect for the point of view of others is an important value that we always try to share.

Solving the case also allows to think outside the box and creates a safe space for sharing ideas and points of view.

Participants of this Team Building format learn the techniques of forensic investigators, of course. But not only! By solving the case, they strengthen their team spirit and trust in each other.

Team Building CSI is an interesting format for those who want to spend a day dedicated to a convention or meeting in an alternative way and a bit… mysterious.

Organize your next teambuilding event with us!
Contact us right now